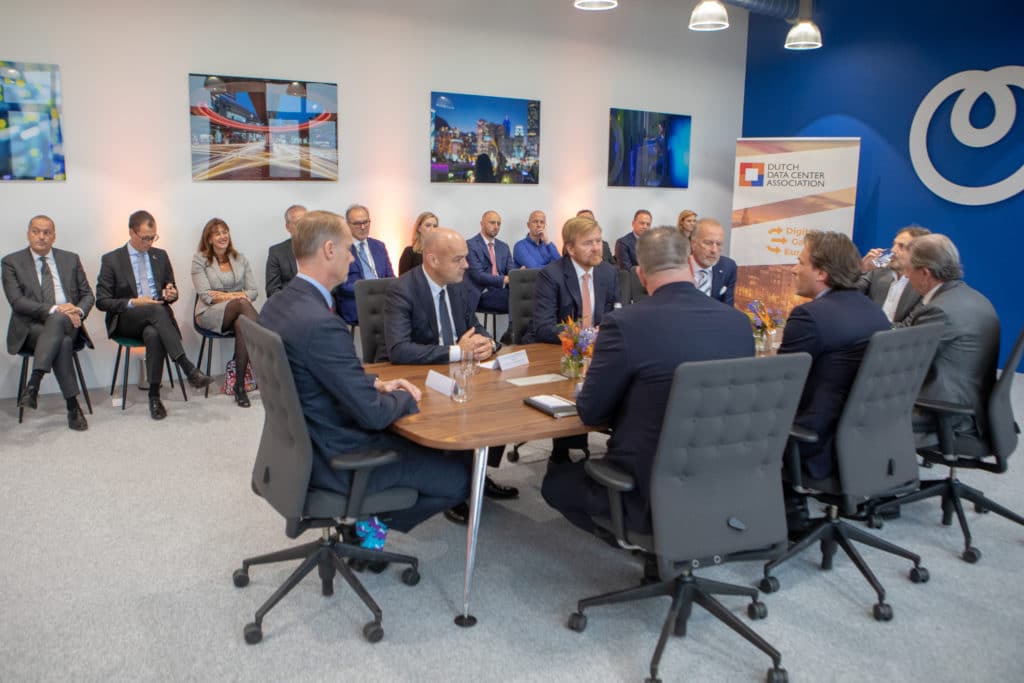 Amsterdam, November 1st 2019 – Trade association Dutch Data Center Association (DDA) and NTT Global Data Centers were honored to host a visit by His Majesty King Willem-Alexander of the Netherlands at the NTT data center in Amsterdam. During this visit on the first of November, King Willem-Alexander participated in a working meeting on the position of the Netherlands as Digital Gateway to Europe and the required digital infrastructures.

During the meeting, initiated by the DDA, representatives of the data center industry discussed the requirements and challenges in safeguarding the position of the Netherlands as Digital Gateway to Europe. A wide range of stakeholders participated in the working visit, among which the Ministry of Economic Affairs and Climate Policy (EZK), the Ministry of the Interior and Kingdom Relations (BZK) and the Municipality of Haarlemmermeer, but also the management of international industry parties such as Booking.com, ING, Tennet, Leaseweb, Equinix, Interxion, EdgeConnex, Iron Mountain Data Centers en AMS-IX.
Stijn Grove, Managing Director of the DDA: “The aim of the working visit was to explore ways in which we can further strengthen the digital position of the Netherlands and the digital industry that enables further digitalization of our country. We are honored that His Majesty acknowledges the importance of our digital industry by dedicating time to actively participate in the meeting.”

The digital economy has become the economy, and relies on a foundation of data centers, network connections and internet exchanges. The Netherlands is home to the largest data center hub in Europe, with Amsterdam as its center of gravity; the “Digital Gateway to Europe”. With a double-digit growth rate in 2018, this mainport now has higher growth rates and a greater economic impact than Schiphol Airport and the Port of Rotterdam.

Its economic impact is enormous. Without data centers, everything comes to a halt. The data center and cloud industry has become the largest investment sector as it accounts for 20% of all foreign direct investments in the Netherlands. Data centers alone add €1,5 billion to the Dutch GDP on an annual basis, generating over 12.500 jobs. Indirectly, over 69.000 jobs at tech start-ups and scale-ups and an additional 39.000 jobs in hospitality in the Amsterdam area rely on the digital gateway.

To get a clear view on what is needed in order to remain the largest digital gateway of Europe, three round tables were organized to bring together key players. The attendants discussed several aspects regarding the data center industry such as digital infrastructure, power, spatial requirements and international positioning. Before taking part in the round tables, King Willem-Alexander took the opportunity to visit NTT’s state-of-the-art data center campus, which officially opened on 11 April 2019. Pieter Duijves, Managing Director Netherlands NTT Global Data Centers EMEA: “We feel honored and privileged that His Majesty visited NTT AMS1, and we hope that the King was satisfied exploring NTT AMS1 as part of the Amsterdam Digital Gateway to Europe.”

ALL PHOTO’S CAN BE FOUND HERE

KickStart Europe starts the year with most…

With the turbulent year of 2020 almost over, everyone is looking forward to the start of the new year. The KickStart Europe 2021 Conference is there…
Read more