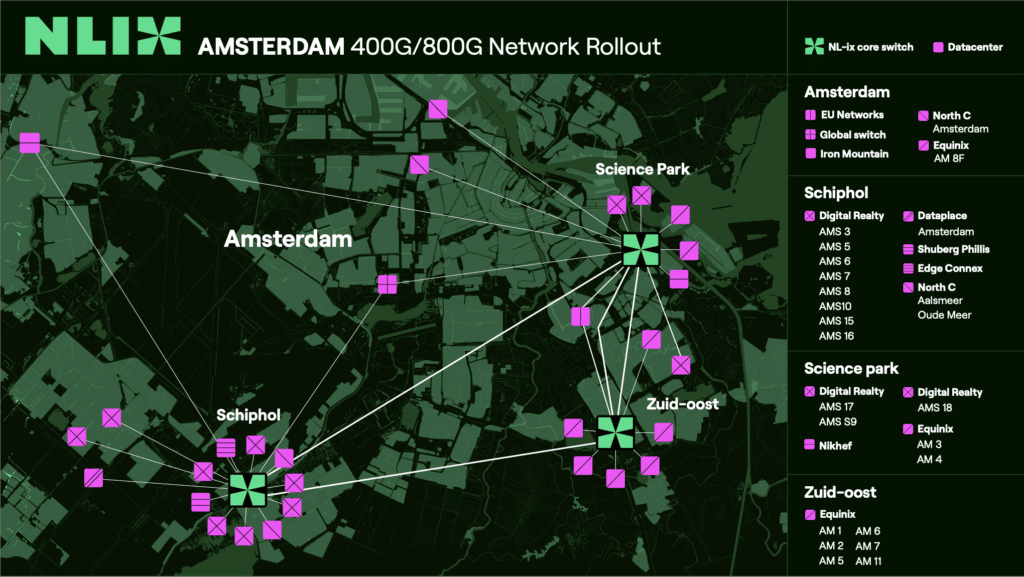 NL-ix has activated its new Amsterdam core network, the available Internet speed from 100Gbps to 800Gbps. This makes Amsterdam the fastest Internet hub in the world. The new Nokia equipment used for this upgrade is not only faster, but also more energy efficient.

NL-ix is an important element of the Internet infrastructure. It is considered to be a vital part of the Infrastructure by the Dutch Government. NL-ix interconnects the networks that make up the Internet and enables the exchange of traffic between them. Doing so it plays an important role in the Internet provisioning of thousands of businesses and millions of consumers in The Netherlands and Northwestern Europe. For this it uses its European network that connects the 100 most important datacenters in Europe.

NL-ix redesigned the Amsterdam component of its pan-European network to cope with constant traffic growth and to make the NL-ix network more efficient and easier to manage. International Internet traffic to Amsterdam has this year exceeded 100 Tbps for the first time, following growth of over 20% for the last five years. It is one of only four global metropolitan markets to have reached these traffic levels, underlining its position as a primary Internet hub. The NL-ix infrastructure improvements strengthen the position of Amsterdam as an Internet hub and the related Digital Mainport function that is of growing economic importance.

The new equipment is not only faster but also greener. The Nokia equipment uses about one eighth (12.5%) of the power per Gigabit of other equipment. (0.1065 Watts per Gb versus 0.9115 Watts). To implement this new technology quickly, efficiently, and cost-effectively required a simplification of the network. The datacenters now have direct fiber connections to the core switches, which enables the use of ‘grey lasers’, eliminating the need for expensive and power-hungry optical transmission equipment. This reduces the cost per customer connection and further lowers overall power consumption. To directly connect the datacenters to the cores of the NL-ix network, 3200 fibers were deployed across Amsterdam via a range of partners.

“This historic step to 800Gbps by NL-ix makes Amsterdam Europe’s first ‘Next-Gen Data Hub’. It strengthens the position of the Netherlands as a Digital Gateway to Europe and as a high-capacity Internet hub, while bringing down total power consumption significantly. It’s a great example of the New Economy that is both digital and sustainable,” said Stijn Grove, Director of the Dutch Data Center Association.

“We have added lanes and increased the speed on the digital highway of the Internet while at the same time we save energy”, said Jan Hoogenboom, NL-ix CEO and Founder. “We are proud to have strengthened Amsterdam’s position as a primary Internet hub while boosting Dutch digital infrastructure to the next level. NL-ix is readying itself for another 100% increase in traffic and 800 Gig will play an important part in this. It is the more economic and more sustainable choice, and we believe it will be the standard for big content networks, international clouds, and larger ISPs”

NL-ix will implement this new technology in Frankfurt in February and Paris and Marseille will follow soon after. More hubs in the NL-ix pan-European network will be upgraded in the following phase.

In 2023, the digital infrastructure industry has to prepare themselves for various complex challenges such as rising inflation rates, energy costs,…
Read more